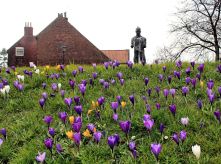 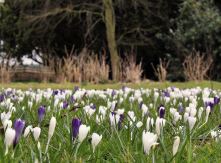 Spring flowers in the lawn

My mother used to say this to us when we were children and she would playfully pinch and punch us; it was something her father had done to her apparently.  I thought of it this morning as it’s 1st of February and wondered about the possible origins of the tradition, and came up with the following –

Another explanation is that whilst president, George Washington met local Indian tribes on the first day of each month, when he would supply fruit punch with an added pinch of salt. It became known as “pinch and punch on the first of the month”.

According to playground rules, your pinch and punch has to be followed immediately with the words, “White rabbits, no return”. By saying so, it means you can’t be pinched back.

The first day of the new month for me didn’t involve any pinching and punching, but I did do some clicking.  I went in search of early spring flowers and wasn’t disappointed.