Four seasons in four hours.  We were ripping our coats off one minute as the spring sunshine burned our backs, and hastily zipping them on again the next minute, and hiding behind our hoods when the horizontal sleet stung our faces and soaked our legs.  To say the sky lurched dangerously from traumatic to serene and back again is an understatement.  That crazy month called April – the one of a typical English spring, cruelly teased and caught us out today.

Paddling through muddy bogs and trekking across green fields and rambling uphill through ancient fragrant woodland provided the best of fresh, clean air that it’s possible to breathe in our country.  My lungs burned with the steep climbs; muscles worked hard.  It took us several hours to complete the walk as per the map, and the best thing about walking in the countryside is what you see.

It was when we stopped off for a quick swig from our water bottles that I spied what I initially thought was twinkling sky through the trees.  It turned out to be a lake; a stretch of sparkling water that was once used for fishing and boating but which seems to have since been abandoned to nature.  The short jetty has collapsed.  The ducks were more than slightly alarmed when I put in an unexpected appearance.  It was a lovely find.

Today we also came across the remains of old mining works.  In the Lincolnshire Wolds.  Who’d have thought it?  We know that the landscape of the Wolds has been shaped a great deal by industry. The obvious one is farming but the not so obvious activity is ironstone mining.  It is hard to believe when looking out over the tranquil landscape of Nettleton and Claxby that it was once a very different scene, a noisy and bleak setting where up to 180 people worked to mine the ironstone of the land.

Underground ironstone mining was part of the life of Claxby village from 1868 to 1885. Nearby Nettleton Iron Mine was first opened around 1928 by Mid Lincolnshire Ironstone Co which later became John Lysaghts and finally British Steel Corporation.  It ran until 1968.

Originally horses were used for haulage with locos introduced in the 1930’s.  Tubs of ore were tipped from the 2’ 6” system into buckets which were then conveyed by aerial ropeways to LNER railway sidings at Holton le Moor.  In turn the ropeway was replaced by a lorry road which still exists today.  There are remains of several adits – an adit is “an entrance to an underground mine which is horizontal or nearly horizontal, by which the mine can be entered, drained of water, ventilated, and minerals extracted at the lowest convenient level”. There are remains of these at the top mine and the later bottom mines as well as workshops, an office which has since been turned into a dwelling, and nearby stables.  Much of the top end stands on what is now private property.  Adit No 5 collapsed apparently, burying a loco and some tubs which still remain buried there.  Images of the remains of the mine are online here –

Once back down on ground level in Nettleton we enjoyed a welcome late lunch at Dunn’s Tearooms.  Leaving our muddy boots at the door, it was a real treat to patter about in our socks on the cool spotlessly clean tiles and rest our weary feet for a while.  Then it was just a short trot back to the Georgian town of Caistor to where we had left our cars.  We’ve promised to repeat this hike in the summer in tee shirts, with a picnic and the full quota of seven of us.  Roll on July and more dependable summer time weather – wishful thinking? 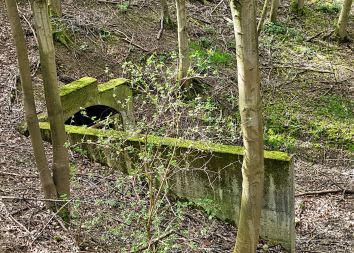 Walking in the Lincolnshire Wolds 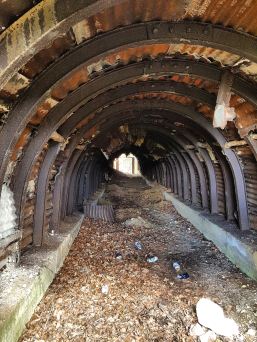