History in the making

I set out simply to enjoy the fresh air and spring sunshine.  But before I knew it I was knee deep in history.  Outdoor exploring never fails to turn up interesting finds, and yesterday was no exception.

Just because I liked the look of the countryside and the name, I parked my car on the outskirts of a tiny hamlet called Cuxwold and walked.  I rambled along every lane in and out of the village until I had a feel for the place.

Hall Farm dominates the landscape at one end with huge, modern, grain drying apparatus.  There’s a road sign at that point to let travellers know that the lane becomes narrower; a joke surely as all the lanes are barely wide enough for one vehicle anyway.  Meet another driver and you have to reverse quite a way.  The houses are few and far between, scattered around in much the same way as they were centuries ago, when this entire area was owned by the Thorold family of Cuxwold Hall. In those days most inhabitants were employed in farming or domestic duties; nowadays most residents commute to the towns for work.

It was in 1861 that Henry Thorold, a keen antiquarian, had James K Colling design and build Cuxwold Hall in a Tudor Gothic style, an unusual design for the area.  He was already 63.  His wife Maria was 52.

As usual in these tiny Lincolnshire Wolds hamlets, there is a church, the “dead centre” of the village.  Local history oozes from the graveyard and adorns the ancient walls inside.  And Henry and Maria Thorold have left their mark here too; they had a stained glass window installed in St Nicholas’ church in 1865, which can still be seen today.  There are also family memorials to their three children who all died in middle age around the turn of the century, although I couldn’t see memorials to Henry and Maria who died before that in 1871 and 1872 respectively.

There was a small parochial school built in Cuxwold in 1862 for 41 children, indicating that this was a thriving village at that time, but the school was abandoned in 1910 as population numbers fell, after which local children attended Rothwell school a couple of miles away.  The closure of the village school more or less coincided with the sale of the Thorold’s Cuxwold Hall family estate in 1912 to a man named John Ernest Sowerby.  And it seems that the period of prosperity for the village ground to a halt with the end of the Thorold era; although changes in agricultural practice were probably relevant factors too.

The church itself is picturesque and has a simple interior.  The door opens inwards over steps down into the building.  I left the church door open for light.  Directly inside is the church organ, with a stool for the organist which is propped up on a piece of wood to keep it level.  A little mirror much like the wing mirror on a car is attached to the organ, so that the player can see who is entering the church door without having to look behind, ensuring that the organist will always commence a wedding march or a funeral dirge at precisely the correct moment.

I liked that there are small off-cuts of household carpet glued along the edge of the step where parishioners kneel to take communion.  And that the words “Let Thy Priests Be Clothed With Rightiousness” are inscribed above the doorway at the rear of the church where the clergyman goes to prepare and dress for the service – through this doorway is a grim scene of darkness and electric meters and tangled bell ropes.  There’s not even a chair for the vicar to lay his top coat on whilst he’s preaching.  This little building has huge character.

Whilst I was leisurely taking photos in the afternoon sunshine, two small children and a beagle bounded across the expanse of springy churchyard turf to find out why I was poking around in their beautiful little church.

They told me that they had lived in Cuxwold for a year, and they pointed out their house along the lane.  Their family had previously lived on a new-build housing estate in a nearby town, and had decided to move to the country.  These two youngsters loved living in Cuxwold they said, because they now had two dogs, a rabbit, guinea pigs, chickens and a Shetland pony.  And there was almost no traffic so they could play out whenever they wanted.  When I asked them about school, they said they go by car for 20 minutes to get there each day.  How times have changed.  And then changed again.

I was reminded yesterday that each one of us exists only temporarily for a short span of time here on earth, yet collectively all of our time fragments are creating what our descendants will one day refer to as history. 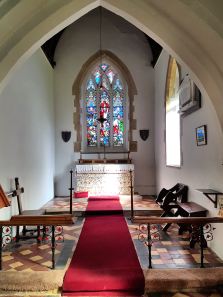 Let thy priests be clothed with rightiousness 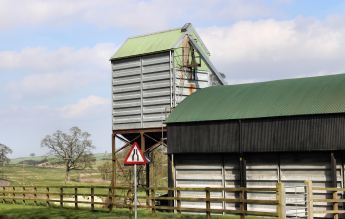 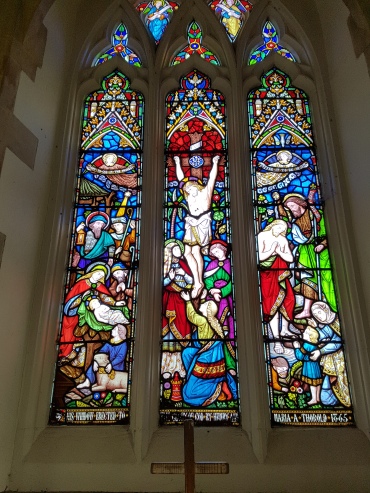 Click on one image to open the gallery and view them all.